In 1973 I attended a meeting at a local church to establish an acupuncture clinic to help poor Blacks and Chicanos in Los Angeles overcome heroin addiction. I was 19 years old and invited to the meeting by one of my movement mentors, Mamadou Lumumba. A similar project had been implemented in the Bronx, New York at the Lincoln Hospital by members of the Young Lords, Black Panther Party, and Provisional Government of the Republic of New Afrika. A young couple, Mutulu and Afeni Shakur, were the representatives from the Lincoln Hospital revolutionary collective and organizers of the meeting. After being introduced, I was like, “this ain’t the same Afeni Shakur I had been reading articles about in the Black Panther newspaper? The same sister who was part of the Panther New York 21 political prisoners? The same freedom fighter who passionately told her story in the book Look for me in the Whirlwind?” She seemed so down to earth. Even though she was a leader in our movement, Afeni treated me, a younger comrade, as a peer. She listened. She joked. No airs or arrogance.

That same year, my comrade Kamau Umoja and I were visiting New York after a conference in Philadelphia. Kamau took me by Afeni and Mutulu’s apartment in Harlem. We came to the door, which was adorned with a Black nationalist poster that asked, “To Which Nation, Do you Belong?”[i] On a cold December night, we were enthusiastically invited into the Shakur’s quaint and culturally nurturing space by Mutulu. The house was decorated for Kwanzaa. The Shakur children, Tupac and Sekwiya, played as we talked about the Movement and caught up. I listened to Afeni and Mutulu attentively. While they were only a few years older than me, I knew they were movement veterans with rich experiences and commitment to our struggle.

I would come to know the Shakurs better, particularly after they made trips to Los Angeles to involve our Los Angeles-based House of Umoja collective in the campaign to free Geronimo Ji-Jaga (Pratt) from captivity after he had been falsely incarcerated. The Shakurs spearheaded the National Task Force for Cointelpro Litigation and Research. The Task Force was formed after white radicals discovered FBI documents proving a governmental conspiracy (Counter-Intelligence Progam a.k.a. Cointelpro) to repress the Black Power and Anti-war movements, and other struggles for self-determination and liberation. Mutulu and Afeni spearheaded the Task Force by organizing the research and political organizing teams and coordinating the legal work that would ultimately lead to the freeing of Geronimo. They came to LA to get us and others organized to form a defense committee and get community support for the legal team.

I got to know Afeni better on these trips when she would come to the West Coast. She came to coordinate with the attorneys, interview witnesses, organize the Task Force members, and do public speaking to raise awareness and funds. Afeni Shakur was a prolific speaker, one of the best in the Movement. She was passionate, motivational, and charismatic. She was the type of speaker who made you want to act. I used to tell folks, “After her speech, I would want to jump off a mountain, if that sister told me to.” Afeni could speak to the brother or sister in the street, as well as the intellectual. She could touch the feelings you had and speak in a language that the “folk” could identify with. A sensitive person, Afeni could tap into the pain and suffering our people were feeling and connect them to the campaigns of the movement.

Afeni also loved our people’s culture. I remember when Bob Marley’s album Survival came out, she played it over and over. Afeni would constantly talk about how the movement needed our songs. We needed a soundtrack to the struggle. Besides being a great public speaker, Afeni was very personable and loved people, which made her an effective grassroots organizer in informal situations. She was a great storyteller who could take simple situations and draw lessons from them. She could also network people, making connections, and building relationships.

Besides being a champion for the freedom of our political prisoners, Afeni was a fighter for the dignity and respect for Black women. I remember one time she attended a movement conference and made an observation. There was a session on “The Role of Women in the Movement.” There were only female participants in this session.  Afeni noted a lot of the male movement leaders were in a session on “(Independent Political) Party-Building.” She revealed, “Wow, can I be in that session? I’m not sure I know enough.” But she decided to attend the male dominated party-building session. After listening to the conversation, Afeni concluded, “Most of these men don’t know what they are talking about either…. I figured out I might as well stay and participate in this conversation. I had as much to offer as most of these men!” This story illustrates how Afeni was great at demystifying and challenging myths.

The 1980s brought a significant decline in the activity of the Black liberation movement. This decline was primarily a result of government repression and our own internal contradictions. Many became cynical and discouraged. I lost track of Afeni during this period. I heard rumors of addiction to crack cocaine. Like many of our family members during the 1980s, Afeni was a victim of the crack epidemic. During this period, I would develop a relationship with Afeni’s son, Tupac. Pac was 18 years old and became a member of the New Afrikan Panther group that I mentored along with others. In a private conversation, Pac revealed the pain he had from his Mom’s addiction.

One of Tupac’s biggest joys was seeing Afeni’s recovery. Because he was able to support his family through his music and acting, Pac physically reunited his family in Dekalb County, Georgia. I was able to reunite with Afeni during this period. She thanked me for playing a role in her son’s life during the period she was challenged with addiction. She shared a commitment to healing, spiritual growth, and transformation from her experience. Afeni and her sister “Glo” (Gloria Jean) formed the core of the family which included Pac, Sekyiwa, and Glo’s children and their extended family. Pac’s fame and wealth and Afeni’s recovery served to empower and bless this family and enabled them to pursue opportunities and confront obstacles.

Some of my comrades are concerned about Afeni’s legacy being solely limited to being known as “Pac’s Mama.” On the other hand, one must note that many of the qualities that make Tupac Shakur a renowned artist are largely due to him being Afeni’s son. Pac’s passion, ability to identify and express the pain and suffering of “everyday” people, and his allegiance to the “underdog” directly comes from his mother. His ability to tell our stories and love the culture of our folks is another “Afenism” that made him loved by millions. Pac was truly a “Shakur”. What does that mean? The Shakurs love their ancestral culture and the experience of grassroots Black people. This is why “Thuglife” is not about crime and being a parasite in our community. “Thuglife” was meant to speak for the most oppressed in our community, the poor, incarcerated, those trapped in the underground economy, and challenged by addiction.

Afeni’s life should encourage us to fight oppression. It should remind us that through love we can conquer addiction and re-unite our families. Afeni will be missed. She will be powerful as an Ancestor. My life is certainly blessed because it was touched by her.

[i] The poster had a red, black, and green flag on right and the U.S. flag on the left and asked the question “To which nation do you belong?”. This poster was developed by the House of Umoja, a revolutionary nationalist collective, to promote Black self-determination. 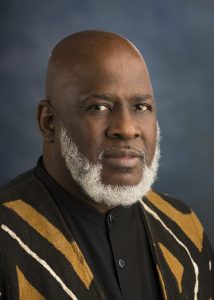 Akinyele Umoja is a scholar-activist. He is a Professor and the Chair of the Department of African-American Studies at Georgia State University. He is the author of We Will Shoot Back: Armed Resistance and the Mississippi Freedom Movement (New York University, 2013). Umoja is also a co-founder of the New Afrikan Peoples Organization and the Malcolm X Grassroots Movement.