In September 2017 students will enrol on the first Black Studies undergraduate degree programme in Europe at Birmingham City University (BCU). The course is by no means the first to address any of the issues of the African Diaspora. African and Caribbean Studies have a history in the UK and work from Black scholars has filtered into a variety of degree programmes over time. Black Studies, however, offers more than a focus on different parts of the Diaspora; it represents a shift in the way that knowledge is used and how it connects to Black communities.

There are few problems of racism that manifest worse in the UK than the US, but the absence of Black voices from the academy is one of them. There is a crisis of representation with only 1 percent of academic staff in Britain being Black. The problem is even worse in the higher levels of the profession where there are only 60 Black full professors across all subjects in the entire country. The university sector is overwhelmingly white and as a result you are lucky to find one Black member of staff in a department, let alone enough to talk about starting a Black Studies programme. The main reason we have been able to launch a degree at BCU is because we have six full time Black academics in the same department. This is a complete aberration in the landscape of British higher education and it was not achieved by accident.

Black Studies has been developing in Britain since my colleague, Dr. Lisa Palmer, and I organised the first Blackness in Britain conference in 2013. Frustrated at the lack of space for Black Studies in the academy we aimed to bring together scholars working in the area. We expected a small turnout, but were overwhelmed by the response with over 170 people registering and 40 papers delivered for the one day event. The momentum from that first conference led to establishing the Black Studies Association and organising a second, two day Blackness in Britain Conference last year, keynoted by Professors Patricia Hill Collins, Barnor Hesse, and Gus John. We have also published an edited collection Blackness in Britain (Routledge), and have a book series of the same name with Rowman and Littlefield International. Building the research base for Black Studies in the UK was how we managed to develop the team of Black academics who are a central cluster in the new Centre for Critical Social Research at BCU.

The degree programme is just the latest step that has developed out of the hard work of creating the basis for Black Studies. This is important because the point of the research and the degree is not just to bring Black faces into white spaces, but to attempt to develop the discipline in a way that transforms the shape of those spaces. To understand why Black Studies is so distinct and important it is necessary to re-engage with the history of the discipline.

Black Studies did not just easily emerge in the US; there was a process of struggle that took widespread and community support, excellently chronicled in the new documentary Agents of Change. At San Francisco State University, in 1968 there was a four month long student led strike to pressure the university; whilst protesting students at Cornel, in 1969, armed themselves in self-defence during their occupation of Willard Straight Hall. Black Studies was demanded because, whilst the universities opened their doors to Black students, they failed to change their racist and exclusionary curricular.

British universities are experiencing the same urge for change from disgruntled students of colour. Massification of higher education means that, whereas in the sixties less than 5 percent of the population went to university, over 40 percent stay on for a degree today. This includes a large number of Black students, who remain underrepresented at the more ‘prestigious’ universities. The narrow curriculum has led to the emergence of student led movements such as ‘Why is My Curriculum White?’, and ‘Rhodes Must Fall’ which challenges the presence of the colonial white supremacist Cecil Rhodes at the University of Oxford. It has long past time for change in British higher education.

The challenge for Black Studies in Britain is to ensure that the change that occurs is significant, not piecemeal and tokenistic. There is now a race equality charter mark that universities can sign up for in order to burnish their diversity credentials. The purposes of Black Studies must go beyond making universities seem progressive. The degree emerges at a time when the cost of a university education has gone from being free, to costing £9000 a year. The system of maintenance grants for the poorest students has now been abolished and replaced with loans condemning students to a millstone of debt. We can never be satisfied broadening a curriculum in the current neo-liberal nightmare of university provision. Unfortunately universities are not vehicles for social change; they are not the solution to the problems facing Black communities. In fact, they represent part of a skewed schooling system that entrenches racial and class inequality.

Therefore, Black Studies is important because, in its more critical incarnations, it offers a blueprint for how to use the university to improve the conditions in Black communities. In his 1972 article ‘The Battle for Black Studies’, Nathan Hare explains that:

[. . .] most crucial to black studies, black education, aside from its ideology of liberation, would be the community component of its methodology. This was designed to wed Black communities, heretofore excluded, to the educational process, to transform the black community.[1]

Black Studies offers the possibility of transforming the relationship of between the university and the community. The ivory tower of the university has often treated Black communities as deviant subcultures to be studied. It is no surprise that during the early days of my doctoral research I was accused by some in my community of being a ‘spy’ because of my role. The transformative potential of Black Studies lies in the wider community being so instrumental in the battle to see it established in the first place. Hopefully, by embedding the community component into the discipline it can serve, rather than exploit or ignore, community needs.

It is for this reason that one of the key strands running through our Black Studies degree is that the students will have to engage with communities off campus. In the first year they are introduced to Black sociologists and ethnographic methods of exploring inequalities in the city. In the second, they have to do work placement in a public, private or voluntary sector organisation that is working to improve the lives of Black communities. By the third year they must design their own Black Studies project that again directly engages in work in Black communities. Alongside this, the students will be taught a range of methodologies that directly engage with activism, organisations, and practice.

The key marker of distinctiveness in Black Studies is the politics of Blackness that underpins the degree. Blackness is not just about the recognition of people of African ancestry, it is a call to take responsibility for the conditions that we face across the Diaspora. Black struggles and experiences from across the globe are wedded across the interdisciplinary degree programme to give context for situations facing people in Britain. There is no pretence to political neutrality in Black Studies, the goal is to discover what Abdul Alkalimat called ‘the science of liberation’. By this he meant that academics should not simply analyse the problems, but actually develop the tools and methods to bring about freedom, justice, and equality. In order to do this is means making organic connections outside the university and never falling into the trap of becoming institutionalized in a system of higher education characterized by neo-liberal thinking. Audre Lorde famously said that the ‘masters tools will never dismantle the masters house’. Everything, including Black Studies, that is funded by a university utilises the master’s tools by its very existence. However, if Black Studies is connected to movements for change outside of the university then it may just be possible to use the ‘Master’s tools’ to assist in the struggle that can dismantle the house, to colonise a part of the university and put the resources to the wider use of Black communities.

‘Black Education for Liberation’ is the theme of the next Black Studies conference at BCU, which will take place in September 2017. We aim to build an international, intersectional space, which includes academics, activists, practitioners, and the wider public in order to play our role in improving the conditions facing the African Diaspora. In doing this we are keen to build networks and learn from what has gone before. This is an open call to anyone who wants to be involved. Black Studies is long overdue in Britain, but now that it is here we want to change the nature, not just the face, of the academy. 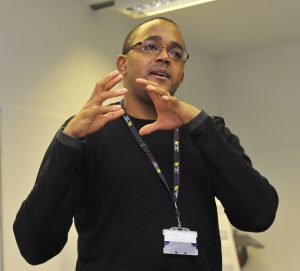 Dr. Kehinde Andrews is Associate Professor of Sociology at Birmingham City University. He recently co-edited Blackness in Britain (2016) and is working on his next book, The Politics of Black Radicalism. His first book was Resisting Racism: Race, Inequality and the Black Supplementary School Movement (2013). Kehinde is director of the Centre for Critical Social Research, founder of the Organisation of Black Unity, and co-chair of the Black Studies Association.