When I wrote in my introduction to The Muhammad Ali Reader (1998) that, as a society, we were on the verge of “over esteeming” Muhammad Ali and thus of grossly misunderstanding his significance and deeply diminishing him as a person, I did not see myself as a revisionist but rather a seeker of a new level of nuance, an explorer.[1] Doubtless, my observation that Ali did not sacrifice any more as an athlete when he was suspended from boxing for three and a half years for his stance against the nation’s conscription laws and the Vietnam War than those athletes who were drafted during World War II was pushback against the leftist version of Ali. Those who served during World War II lost significant chunks of their athletic life spans and were, in many cases, in danger on the battlefield to boot. Heavyweight champion Joe Louis, the great crossover African American athlete of the Depression, did not fight competitively from March 28, 1942 to June 18, 1946, over four years, because of Louis’s army service during World War II. This was a longer layoff than Ali’s. What price patriotism? What price dissent? (Hall of Fame pitcher Warren Spahn had a layoff from baseball as long as Louis’ from competitive boxing during World War II. He did not seem to think it hurt his career; rather he thought he might have been aided by it. It is an open question whether the layoff helped or hurt Ali.)

In thinking about Ali’s layoff in this context, I simply wanted readers to think about it more athletically in order to reveal something ironical about it politically. What did it mean compared to other young men who lost years in their prime because of military service as he had opposing such service? But such framing was not meant to suggest that Ali was insincere or, worse, inauthentic as a dissenter, which was precisely the point of  a recent piece in the rightwing online journal, Breitbart News, that compared Ali unfavorably to Boston Red Sox Hall of Fame outfielder Ted Williams, who served as pilot in both World War II and the Korean War, the upshot of which was accusing Ali of being a draft dodger. (The only other American fighter who was publicly accused of draft dodging was heavyweight champion Jack Dempsey, who avoided conscription during World War I, accused by his first wife, Maxine Cates, during their bitter divorce in 1919. Dempsey was brought up on charges in federal court of draft evasion in 1920 but was acquitted.[2])

The Breitbart article wanted to claim, in essence, that Williams made the greater sacrifice, losing time as an athlete during his prime and risking his life for his country while in combat. But the article misses the point: Ali did not dodge the draft; rather he challenged its legitimacy and was willing to pay the price for the challenge by going to prison if he lost. If he were a true draft dodger, Ali would have tried avoiding both the draft and prison by any means he could. Whether his religious grounds for opposing the draft were ethically acceptable or reasonable (he was not claiming to be a conscientious objector in a traditional sense by claiming not to believe in the morality of violence but a Muslim duty-bound to the dictates of his religion’s call to arms) is not in any way a reflection on whether they were sincere or authentic.

In the case of Ali in this instance the right wants to have it both ways with Islam: it is wrong and it is insincere as a set of religious beliefs (although with Muslim terrorists, the right underscores that the beliefs are wrong but that they are sincere which makes them all the more dangerous.) But the Breitbart article is part of a revisionist interpretation of Ali, to claim he was inauthentic, fake, a fraud, a hypocrite, a shallow man. Ali as symbol and man is thus part of the Culture Wars; the revisionism was not all generated by the right, by the all means, but also by some liberals who became weary and wary of Ali hero-worship in the fighter’s declining years and who wanted to challenge the liberal and leftist view of Ali as the grand American dragon-slayer.

In recent years, the core of revisionist criticism of Ali particularly centered on his treatment of his arch rival Joe Frazier, whom he beat twice in three fights, much of it about how unfairly and cruelly Ali castigated and belittled Frazier in the pre-fight promotions as an Uncle Tom and a gorilla, and as ignorant. Frazier was always bitter about this, about how, even when he was champion after beating Ali in 1971, he was never given his due because he existed solely as Ali’s foil. “Always able to feel the lancing invective with which Ali assaulted him, wrote Mark Kram in Ghosts of Manila, “Frazier began to see it as an orchestrated campaign to crush any respect he had in the black community.”[3]

Ghosts of Manila is the ultimate Ali revisionist book, taking Ali down a few pegs for his sexual excesses (while he preached abstinence and sex sanctified by marriage), for allowing the Nation of Islam to control his money (much to Ali’s financial detriment), for allowing himself to be bullied by the Nation about opposing the draft, almost forcing him to be a martyr, for misusing his own money in ways that were not unusual for a professional athlete but shockingly irresponsible nonetheless, and for denigrating his black opponents, largely for the amusement of his large white audience, despite his proclamations of being a loyal race man.

There is nothing that Kram describes that is untrue; indeed, bits and pieces of some of Kram’s assertions can be found in other Ali books. But the overall impression is that Ali, like the Nation of Islam, is something of a fake, a bit of a post-modernist confidence game. Nothing underscores this as much as Kram’s description of Joe Frazier as being of Gullah ancestry, where Frazier sees himself (and Kram frames him) as a pureblood (He once called Ali “a half breed”), a black from the fields, unassimilated.

To be sure, Ali politically denigrated his black opponents (who were far more competitive threats to him than the relatively few white fighters he fought) because, first, there were few other options he had to interest the general public in a bout between two black men other than politicizing his fights. Nearly all of Joe Louis’s major fights were against whites. The political dynamic of racial and ethnic difference was built into the bouts (something which boxing has always emphasized to get fannies in the seats) and Louis really had to do nothing to stimulate the public’s fantasies about what the public imagined was at stake. In the age of the black dominance of the sports, Ali had to resort to something else and in the age of civil rights and Black Power he found a winning formula: cast himself as a race hero fighting the white man’s lackey, a feat that reshaped black disunity as the race’s own sort of culture war.

Second, Ali found this to be a way to celebrate and defend his new consciousness as a politically aware black man as a result of publicly joining the Nation of Islam in 1964. (He had actually been a fellow traveler since 1961.) Being a Muslim athlete made him a new kind of being, a reinvention, something fresh and different on the scene. In this sense, Ali was an original, even as he copied the trash talking of professional wrestling, boxers like John L. Sullivan (“I can lick any son of a bitch in the house”), and the exaggerated claims of modern advertisers and Hollywood trailers, the exaggerations of popular culture. He was both P. T. Barnum and the acts that Barnum was trying to sell. In the age of mass culture, what could possibly be authentic beyond what you asserted rhetorically was authentic? For Ali and his generation, authenticity was a belief, not a fact, a manipulation of the truth, not a quest for it. And everyone in the modern world knows authenticity to be a manipulation.

Third, as a champion athlete he was a fierce competitor who defined his greatness by his rivalries. How could he truly be great unless he could convince the public he was fighting for more than just money or even fame? Was his rivalry with Frazier really very different or worse than that between Joan Crawford and Bette Davis or between Tesla and Edison or between soul singers Joe Tex and James Brown? Would anyone, outside of professional boxing, remember Joe Frazier now if Ali had not treated him the way he did? 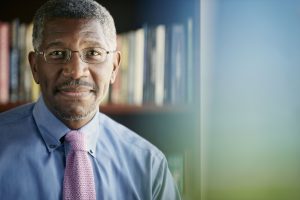 Gerald Early is Professor of English and African American Studies at Washington University in St. Louis.  He currently serves as the editor of the university’s online journal, The Common Reader.