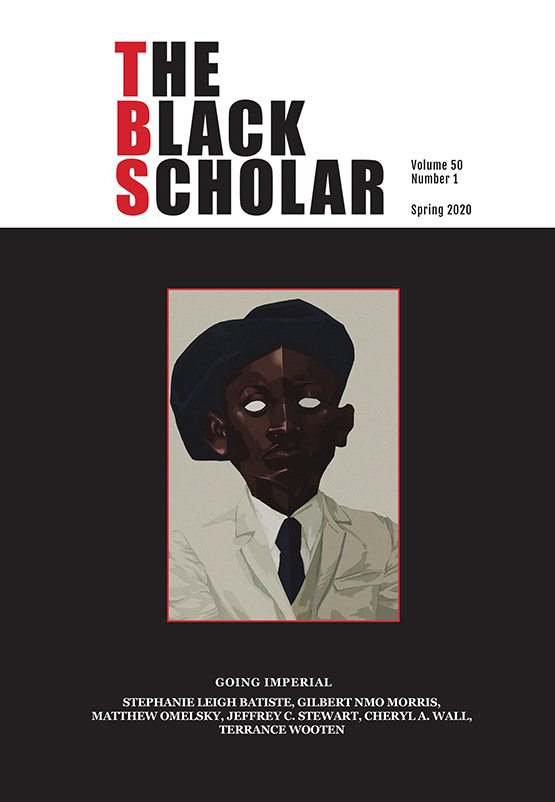 Going Imperial inaugurates the fiftieth volume of The Black Scholar. The issue serves as both a testament to the journal’s longevity and a meditation on the Black intellectual tradition that serves as its raison d’être. At the center of this volume is Jeffrey C. Stewart’s The New Negro: The Life of Alain Locke, winner of the 2018 National Book Award and the 2019 Pulitzer Prize. Both Stewart and Locke’s work mark monumental contributions to the Black Studies project(s), serving as embodiments of where the field has been—even before its institutionalization in the late 1960s—and where it stands to go.

After Editor-in-Chief Louis Chude-Sokei starts the conversation with a provocative question of whether or not Black Studies has “gone imperial,” Stephanie Leigh Batiste opens up the forum on The New Negro by chatting with the book’s author. Over the course of the conversation Batiste and Stewart touch on wide-range of topics, including the book itself, long-form modes of study and research, and questions of Black masculinity, Black Studies, and Black sexualities.

Contributors Cheryl Wall, Gilbert NMO Morris, and Terrance Wooten each put Stewart’s The New Negro under critical scrutiny. Wall—a first rate scholar of the Harlem Renaissance in her own right—raises questions about Locke’s troubling relationship with several notable women of the movement, while also taking stock of the “extraordinary achievement” of Stewart’s biography.

Morris pushes us to map the terrain of Locke’s foreign policy influence, reminding us that Locke was both the product of and advocate for a broader Black World. According to Morris, such advocacy “rooted his [Locke’s] foreign policy concepts in the experience of displacement, subjugation and marginalization of the negro.” In this respect, Locke fits in a longer genealogy of Blacks in American foreign policy who attempted to center “human value as a recognition and commitment to the acclaimed values of the West.”

Wooten draws on Black queer Studies and “queer of color” critique to interrogate Locke’s complicated queer life. He encourages us to reckon with the troubling relationship between value and geography, while also coming to terms with “the limitations of any Black sexual politics that relies on class ascension/mobility as its primary way of conceptualizing freedom or belonging.”

Finally, Mathew Omelsky steps away from Stewart’s book and instead draws our attention to Zimbabwean novelist NoViolet Buluwayo’s novel, We Need New Names. Omelsky’s work is motivated by a desire to both think through and expand the limitations of Black Studies’ recent discourse on “fugitivity.” He asks, what do notions of fugitivity—raised by scholars like Fred Moten, Jared Sexton, and Saidiya Hartman—have to say about Black folk beyond the boundaries of the United States. And, more importantly, how can African literary studies expand and trouble prevailing theorizations of fugitivity in Black Studies.

Not to be overlooked, South African artist, Pola Maneli’s Slumflower serves as the cover art for the issue. Like Locke, Stewart, Omelsky, and the rest of the contributors to this volume, Maneli’s work is animated by the ever-vexing questions of Black racial identity—how it’s constructed, (mis)understood, disseminated, and essentialized. Maneli’s work reminds us that even the best, and most well-meaning, attempts at defining and representing  “the race” seem to fall short, revealing instead the limitations of our own observations.

For a limited time, access the introduction and “Intellect, Art, Culture: Legacies of The New Negro; A Forum on Jeffrey C. Stewart’s Biography of Alain Locke.”

Subscribe to our 50th anniversary volume here. Personal subscriptions are $41 USD. Volume 51 includes the above issue, plus At the Limits of Desire: Black Radical Pleasure, part one of What Was Black Studies?, and Beyond Borders: Black Girls and Girlhood.

In our 2021 volume, keep an eye out for Black Privacy, Caribbean Global Movements, part two of What Was Black Studies?, and more . . .

For our 2022 volume, look for Post-Soul Afro-Latinidades, Other Black Independent Cinema, and more . . .

The Department of Sociology & Anthropology and the Africana Studies Program at Lehigh...
more

2022-2023 FELLOWSHIPS AT THE WOODROW WILSON CENTER

The Woodrow Wilson International Center for Scholars is announcing the opening of its 2022-2023...
more