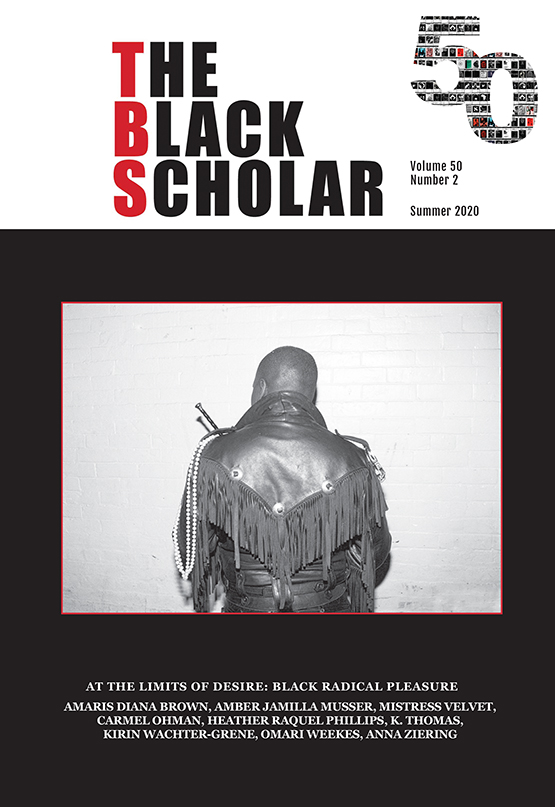 At the Limits of Desire initiates The Black Scholar’s Fiftieth Anniversary celebration by engaging with Black sexuality studies in order to reimagine the field anew. Guest-editor Kirin Wachter-Grene and TBS Editor-in-Chief Louis Chude-Sokei, along with artists, scholars, pedagogues, kinksters, and sex workers alike both in and out of academia, continue the journal’s mission to cut at edges and push at envelopes.

The issue opens with Carmel Ohman’s, “Undisciplining the Black Pussy: Pleasure, Black Feminism, and Sexuality in Isa Rae’s insecure,” which argues that Rae’s HBO television series expands the possibilities for Black women’s sexual self-expression. Omari Weekes’ “Something in the Holy Water Ain’t Clean: Time and Religious Inversion in Hal Bennett’s Lord of Dark Places” is the first of two essays that look closely at the edges of desire in African American literature. Weekes reads Bennett’s notorious underground 1970 novel Lord of Dark Places, arguing for its satirical inversion of Christianity which makes space for new articulations of Black masculinity. Likewise, K. Thomas explores the impact her religious upbringing in the Haitian Baptist church (HBc) had on her sexual development as a young woman and later, initiate into the San Francisco and New York queer, Black BDSM scenes.

Amber Musser returns to TBS with “The Limits of Desire: Jacolby Satterwhite and the Maternal Elsewhere.” In her reading, Satterwhite’s use of BDSM imagery oscillates between transparency and opacity—what we think we know and what we have yet to begin to imagine. In keeping with the connection between pleasure and creativity is Mistress Velvet’s practice of making her white, male clients read Black feminist theory, a commitment that has garnered the Chicago-based Pro Domme national attention. In Kirin Wachter-Grene’s interview, Mistress Velvet discusses this practice with an emphasis on the Black feminist lineage. Ancestry and lineage return in multi-media artist, curator, and educator Heather Raquel Phillips’s, “Finding Family,” which limns family pain and the construction of alternative family structures in order to show how laborers in adult industries have been mentors and kinfolk.

A shout out must go to Chicago’s Leather Archives and Museum (LA&M), dedicated to preserving the histories of leather, fetish, and kink and the hidden histories of race in that cultural complex. The LA&M has provided generous funding for two contributors to this special issue, Kirin Wachter-Grene and Heather Raquel Phillips, to pursue their research and teaching of Black sexuality. With the increase in public acknowledgement of practices of Black radical pleasure, perhaps independent institutions such as the LA&M and artists such as our cover photographer, Efrain Gonzalez, a legend who has tirelessly provided visual testimony, will be increasingly acknowledged.

Subscribe to our 50th anniversary volume here. Personal subscriptions are $41 USD. Volume 50 includes the above issue, plus Going Imperial, What Was Black Studies?, and Beyond Borders: Black Girls and Girlhood.

In our 2021 volume, keep an eye out for Black Privacy, Caribbean Global Movements, part two of What Was Black Studies?, and more . . .

For our 2022 volume, we’re working on Post-Soul Afro-Latinidades, Other Black Independent Cinema, and more . . .