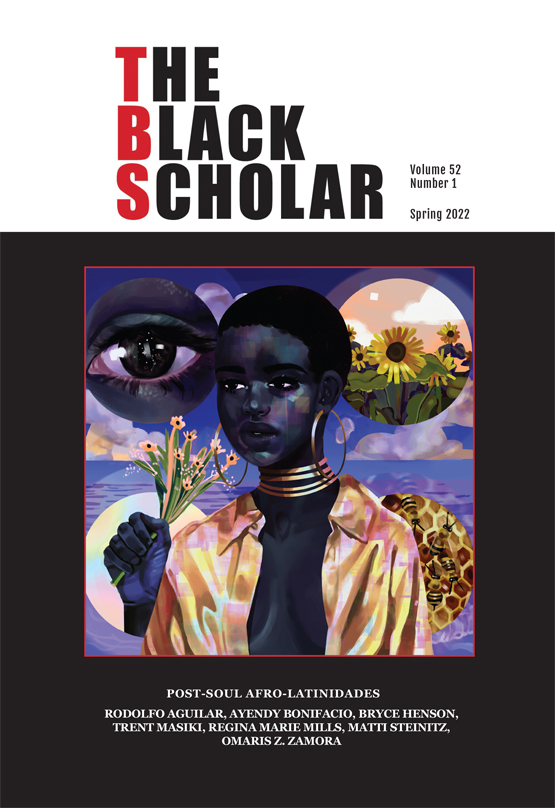 Post-Soul Afro-Latinidades convenes social commentary and scholarly critiques on the post-soul aesthetic’s ideological entanglement with Afro-Latino subjectivity, expressive culture, and political thought in the US and Latin America. Historical and cultural contiguity provide the rationale for this long overdue intervention. The post-soul condition and sustained interest in Afro-Latinidad by US scholars emerged simultaneously in the wake of the Civil Rights and Black Power/Black Arts movements. Recognizing this harmonic convergence, the co-guest editors of this special issue bring together writers and scholars who variously embrace, reject, and modify conventional understandings of Afro-Latinidad and the post-soul aesthetic.

Cienna Smith’s innovative rendition of the Orisha Oshun graces the cover, figuratively signaling the issue’s understanding of post-soul Afro-Latinidad as an inherently diasporic, elastic, eclectic, and transnational concept of ethno-racial belonging and identification. The issue opens with “Naming Loss: An Interview with Naima Coster.” Coster, a best-selling novelist of Dominican, Cuban, and Curaçaoan heritage, discusses her views of the post-soul aesthetic and shares with the co-guest editors how being an Afro-Latina writer shaped her MFA experience, her themes and characters, and the marketing of her novels. Examining the impact of US Soul music in Panama, Matti Steinitz traces how Black Power symbols, styles, and discourses provided many young Afro-Latin Americans across the hemisphere with a means to break with prescribed nationalist and folkloristic identity constructions of blackness. Moving the discussion southward to Brazil and forward to the present, Bryce Henson explores singer-songwriter Karol Conká’s music, videos, and role on Big Brother Brazil to examine the tension between mestiço-oriented brasilidade’s erasure of blackness and the Brazilian post-soul aesthetic’s use of Black Brazilian musical genres and social movements to disrupt that erasure.

The next three articles investigate post-soul Afro-Latinidad in video games, social media, and trap rap. Examining the Sony PlayStation video game Marvel’s Spider-Man: Miles Morales (2020), Regina Marie Mills argues that Miles Morales, as Spider-Man, is a post-soul superhero who invites readers and players to contend not only with what it means to be Black but also with the marketability of blackness and Afro-Latinidad in post-Civil Rights America. In her article, Omaris Zunilda Zamora examines how Cardi B’s trance-inducing social media presence challenges Black feminism, Chicana feminism, and the post-soul aesthetic to substantively engage, rather than elide, Afro-Latina epistemologies. Calling attention to Mexican-American rapper Kap G and the post-soul South, Rodolfo Aguilar contends that Kap G’s sonic fusions of cumbia and trap rap symbolically represent the Latinx transformation of Atlanta’s demographic landscape and hip hop scene.

The issue concludes with “Our Patrias Cannot Liberate Us from Anti-Blackness: Post-Racial Myths in the Latinx Diaspora,” a personal essay by Ayendy Bonifacio. Using the day that he became a US citizen as a point of departure, Bonifacio meditates on the anti-racist protests stemming from the murders of Rayshard Brooks, George Floyd, Breonna Taylor, and Ahmaud Arbery, asking Latina/o/x communities to come to terms with their histories of anti-blackness.

For a limited time, access the intro and “Naming Loss: An Interview with Naima Coster” for free.

Personal subscriptions are $44 USD and include 4 issues. Volume 52 (2022) includes the above issue, plus Black Archival Practice I and II, and Black Religions in the Digital Age.

In volume 53 (2023), keep an eye out for The Shape of Things to Come: Africology and the Rise of Afrofuturist Studies (CFP), Unsafe Words: Black Radical Pleasure II (CFP), and more.

2023-2024 FELLOWSHIPS AT THE WOODROW WILSON CENTER

The Woodrow Wilson International Center for Scholars is announcing the opening of its 2023-2024...
more

ORGANIZATIONAL STUDIES. The Interdisciplinary Program in Organizational Studies at the University...
more

The University of Virginia School of Law seeks to hire an Assistant Dean for Public Service and...
more