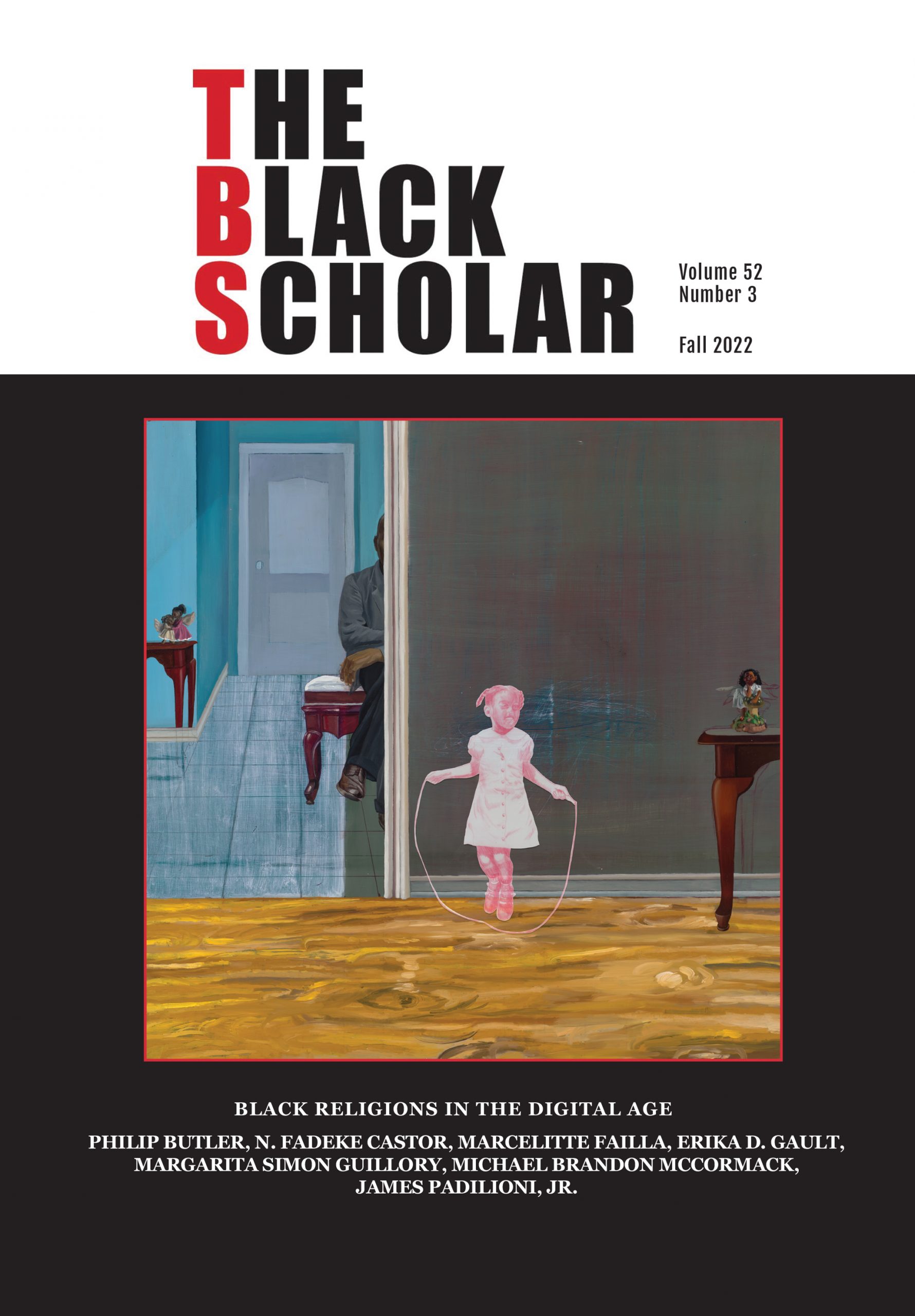 Black Religions in the Digital Age assembles six innovative essays that explore the intersections between Black religiosity and technology. These essays provide introspective views of intricate interconnections between Black religions, including African Traditional Religions, Christianity, witchcraft, and trans/posthumanism, and emerging digital technologies such as the Internet, social media, software applications, and virtual reality. As a result, these scholarly renderings lay the groundwork for a new subfield called “digital Black religion.”

On the cover, Shantel Miller’s Back in My Body beautifully captures a little Black girl freely playing in a room set apart from authoritative eyes. Similarly, scholars of digital Black religion, like those whose work fills this issue, are also freely at play. Operating outside the normative boundaries of religious studies and Internet studies, these scholars, in their own way, employ diverse methodological approaches to create new theories that capture the dynamic relationship between Black people’s engagement of technology and religiosity.

In the opening essay, Erika D. Gault considers how digital activism and digital cultural outputs empower Black users to create alternative life-affirming pathways, resulting in a new way of conceptualizing Black religiosity through a lens of digital activism. N. Fadeke Castor’s essay draws from the wellspring of virtual ethnography to advance a theory of political activism. She turns her attention to the various ways that practitioners of African Diasporic religions use social media and video conferencing software as modes of resistance against racial hegemony. Both essays capture the ways in which digital Black users use religion to push back against socio-political agendas of antiblackness.

The next three essays enter this conversation of antiblackness through Black beingness. In his essay Philip Butler presents “digital spirituality” as a biotechnological code that is most evident in Black people’s creative usage of digital tools to grapple with the mundaneness of life, while Marcelitte Failli considers how Black womxn and femmes witches employ social media to construct personalized and collective worlds defined by Black beingness. Michael Brandon McCormack further nuances Butler and Failli’s discussion of digitally-influenced modes of subjectivity. Specifically, McCormack’s essay illustrates how Black youth create virtual sacred spaces that offer a counter-narrative against an anti-Black world.

While this issue focuses on the “digital age,” the last essay by James Padilioni Jr. argues that digital technologies should not be viewed as something new. Instead, digital technology is best viewed as an extension of analog-algorithmic processes operating in Black Diasporic communities well before the digital age. A claim that he substantiates in his positing of Hoodoo as a cybernetic technology. Collectively, these essays show the nuanced manner that Black digital users are intentionally playing with definitional boundaries of Black religions, presenting new understandings of Black religiosity that are informed by liberation, spiritual citizenship, world building, transhumanism/posthumanism, life affirmation, and cybernetics.

For a limited time, access the introduction “Playing on the Margins: The Emergence of Digital Black Religion,” by Margarita Simon Guillory and “Assembling an Africana Religious Orientation: The Black Witch, Digital Media, and Imagining a Black World of Being,” by Marcelitte Failla for free.

In volume 53 (2023), keep an eye out for The Shape of Things to Come: Africology and the Rise of Afrofuturist Studies, Unsafe Words: Black Radical Pleasure II and III (CFP), and more. For volume 54 (2024), we’re working on Black Women’s Contemporary Speculative Fiction, an issue on The New Black British Cinema, and more.

Rice University’s Department of Modern and Classical Literatures and Cultures, in collaboration...
more

The Department of Spanish & Portuguese at New York University invites applicants for an...
more

University of Virginia School of Law seeks a Legal Data Scientist to lead and manage its Legal Data...
more

The University of Utah invites applications for a tenure-track position in French at the rank of...
more

The Department of Biochemistry & Molecular Genetics (www.virginia.edu/bmg) and the University...
more

The History Department at Boston University invites applications for a tenured position at the...
more